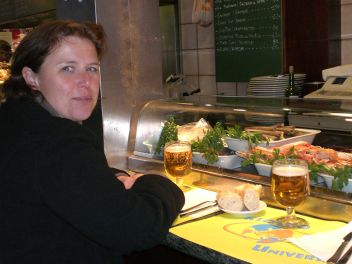 It is 9.30 a.m. in the morning. Under a blue and cloudless sky, a low Catalan sun easily melts away any remnant frost on the awnings of the stalls at La Bouqueria market on Las Ramblas. Inside, we wrestled with the crowd for a seat at a tapas bar, and once armed with a couple of cold cervezas (see pic), we begin to devise a cunning plan to punctuate our short week-end in Barcelona with as many eateries and wine bars as our stomachs and bladders can withstand. The list would be modest, but distinguished … for example, for dinner, we should try to eat at Santa Maria (Carrer del Comerq) where a number of chefs had trained under Ferran Adria  of el Bulli fame, or les 7 Portes (Pg. Isabel II), one of the city’s oldest and most reputable restaurants or visit Can Paixano (Carrer de la Reina Cristina), a rowdy bar serving cheap (but sometimes awful!) cava.

And as always, we were prepared to be led by our noses and so chance also brought us to La Vinya del Senyor (Placa de Santa Maria) which stocked some 300 fine wines by the glass, Cuines (located in the new Santa-Caterina market with the amazing roof) – a foodie paradise with themed areas and a great tapas bar at the entrance, and Vascelum (also on Placa de Santa Maria) – I don’t think I will ever forget the taste and texture of my perfectly grilled cuttlefish.

But the gastronomic highlight must go to Santa Maria. We had been told this place gets busy and as booking wasn’t viable, we arrived early and loitered aimlessly until we were invited in shortly before the opening time of 20:30, and 15 minutes later, every table in the restaurant was occupied! The wine list seemed very personal as if chef had made the selection from his own cellar, but as we had ordered the Menu Degustation, there seemed little point in attempting to match wine to food so I selected an Altun, a surprisingly elegant Rioja made 100% from Tempranillo. And so our dining adventure began …

To say that our taste buds were raped that evening is an understatement, but I cannot remember another meal quite like this where the diner is taken on a journey from classic French cuisine to the far east, then whisked suddenly to Celtic delicacies, back to Mediterranean seafood before finishing with three desserts, one of which contained space dust (yes, space dust – I kid you not), which had the roof of our mouths crackling and popping with joy! Then there is the value for money aspect. For just under 32 EURO (plus taxes), we were treated to the following:

Ummmmmmmm, I so want to go back there …