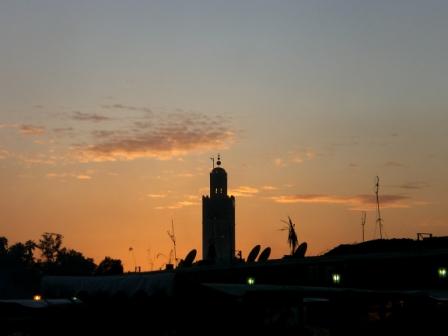 Marrakech is a place of beauty, which is desperately looking for the eyes of its beholder. Whether it is in the deepest and smelliest alleys of the souks, or the greenest and prickliest parts of the Jardin Majorelle, or the most intricately tiled palaces around Bahia, or the contrast of the fantastic food stalls with the heart numbing squalor of beggars on the Djemaa el Fna, or the freezing cold but picturesque villages in Ourika on the ascent to the Atlas mountains – one is attracted to its beauty in the same subjective way that people generally react to Marmite: you either love it or hate it!

But on the quality and comfort of our riad (Dar Vedra), the verdict is unanimous – Didier and Sebastien have perfected the art of service to the extent that guests feel like they have been invited to a friend’s home, rather than the usual functional arrangement of providing a room for the night in exchange for money.

Riads in architectural terms also convey an understated modesty that is prevalent in islamic culture: the high but very plain exterior walls conceal an inner courtyard that is open to the elements, and is often adorned with a central fountain and lush greenery. From this inner sanctum, doors open into rooms on all sides of the courtyard and if it is a dar, there will be a second storey supported by tall columns that tower upwards to an open sky … think of it as a house that has been turned outside in vis-a-vis Lloyds of London which has been turned inside out. And then compare this to an oriental home (or indeed a capitalistic western one) that seeks to flaunt the wealth of its inhabitants with unnecessary alcoves, fancy windows, colourful roof tiles, and in some cases gilded cornices. All houses should be built like riads, where those living in them can enjoy their beauty from within the comfort and security of their homes, rather than waste it all on strangers and passers-by.

More pics from this little adventure to follow … meanwhile, there is a pile of work to chomp through before the Christmas break …. ummmm, what *is* the collective noun for a mass of emails in you Inbox?